Marika Katou is a teenaged girl who has a part-time job in a maid cafe and is a member of the space-yacht club. She lives with her mom, an air traffic controller of sorts and a retired pirate, and she believes that her father is dead. One day, she receives word that he had only recently died, and that she has inherited the captaincy of his pirate ship, the Bentenmaru. 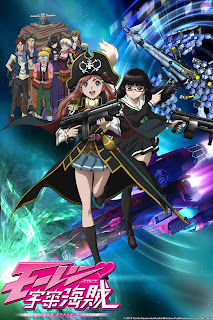 My first reaction to the description of this show was skepticism. I've been burned by far too many shows about high school girls that are little more than fanservicey moe-bait with panty shots, cat-fights, and faceplants by hapless (male) protagonists into boobs, and I'm sick of that shit.

Bodacious Space Pirates is none of these things. It's a story about girls being awesome, working together, being strong, and being themselves.

Marika attends a girls' school, and there are no Mean Girls homages. The yacht club goes out on a practice cruise, in 0 g, and there are NO panty shots! (This is where I was sold on the show. The girls are floating down the main body shaft of the ship in their uniform skirts, and the skirts didn't flip up at all.)

Piracy, in this world, is largely an insurance scam. Luxury interstellar cruise companies hire pirates to "attack" their ship and steal their passengers' jewels. The passengers view it as entertainment, and they've got insurance through the cruise company. (You really shouldn't think about it too hard.) But pirates are also hired for escort missions or information gathering, so it's not entirely putting on a show for rich people.

Naturally, there are large-scale politics afoot, with the free planets, a galactic empire, the Serenity kingdom, and a stellar alliance, not to mention the various allegiances among the pirates! In the second season, a mysterious pirate-killing ship appears, and the pirates have to overcome their differences and band together.

Another cool thing is how ship-to-ship combat works. There are laser cannons, of course, but they also use fancy computer warfare and hacking to interfere with the other ship's navigation systems or hide themselves from the other ship's scanners.

If that isn't enough, Pirates is a love letter to old-school shoujo anime, dressed up in a very modern style.

Marika's best friend, the Normal Girl Mami Endo, works with her at the maid cafe. Once Marika is recruited to the Bentenmaru, Mami makes her a new outfit to look cool as a pirate captain. (Like in Cardcaptor Sakura!)

Chiaki Kurihara is the heir to the pirate ship Barbalusa, and she ends up being sent to Hakuouh Girls' Academy, ostensibly to keep an eye on Marika. They become friends, because Marika doesn't believe in your cat-fight bullshit. (Chiaki is also a tsundere who loves parfaits.)

Gruier Serenity has the same hairstyle as Tsukino Usagi (Sailor Moon), and when she dresses formally, she looks like Queen Serenity (who Sailor Moon grows into). Her younger sister Grunhilde wears Oscar de Jarjayes' uniform.

Lin Lambretta bears more than a passing resemblance to Kaoru-no-kimi from Oniisama E.

At 26 episodes, Pirates will take a few days (or weeks) to watch in its entirety, but it's definitely worth it. US-based readers can watch it free at crunchyroll.
at 15:30

I need to give it another shot. I found the characterizations very cute, but took to watching it with a couple of friends. After they moved, I never finished it.

I belatedly realized I wanted to talk about the crew of the Bentenmaru and how they're a bunch of ... unique individuals, like the rough guy who collects stuffed animals and the Pocky-eating systems gal.

I was just really excited about there being a show about high school girls that didn't involve Mean Girls, catfights, and overdeveloped breasts.