Anime you should watch: Psycho-Pass

The Sibyl System was introduced to bring about a peaceful society. Through monitors spread throughout the cities like security cameras, it can measure people's crime coefficients--a reading of their mental state that shows how likely the person is to commit a crime, also known as the Psycho-Pass.

The Public Safety Bureau has Criminal Investigation Divisions, who are sent out to crime (or potential crime) scenes to apprehend the criminal. The story begins with Akane Tsunemori's first day on the job at MWPSB's CID 1. 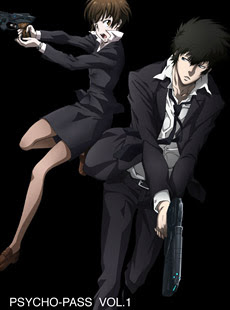 Akane's senior partner, Nobuchika Ginoza, is a hard-line, by-the-book cop. Her team of Enforcers, latent criminals who have agreed to work for the PSB, includes Shinya Kogami, a man who doesn't play by the rules. Tomomi Masaoka is the oldest of the Enforcers, so frequently called "Old Man" by his teammates that I had to go to Wikipedia to remember his name. He was a detective in the time before Sibyl, and he didn't weather the transition well. (He also has a metal arm, the presence of which is never explained.)

It starts with a criminal-of-the-week setup, like police procedurals do. But they uncover a link between several seemingly unrelated crimes, who turns out to be a person Kogami has been investigating for several years as the culprit of another set of crimes, Shogo Makishima.

The setup is indeed very Minority Report, and around episode 14, Makishima deftly puts a lampshade on it, by discussing Philip K. Dick (though the book he refers to is Do Androids Dream of Electric Sheep?).

The opening flash-forward scene, where Kogami and Makishima are fighting in a tower, is very reminiscent of the Cowboy Bebop episode "Ballad of Fallen Angels," and it actually occurs in an earlier episode than I expected. There is kind of a Spike-Vicious vibe going on between them.

There are twists and turns, and the series ends exactly the way it needs to (while leaving an opening for a sequel, clever writers...). It didn't end the way I wanted it to (because I've got my own particular narrative kinks and I really wanted Akane to make a different choice), but it ended in the only way that would have been consistent with the way the world was presented.

The entire show is 22 episodes long. US-based readers can watch it free at Funimation. You lucky people won't even have to hang from the cliffs for a week like I did!
at 15:30