Anime you should watch: Tiger and Bunny

In NC 1978, in the city of Sternbild, superheroes compete with each other on live TV in a sort of reality crime TV show called Hero TV. 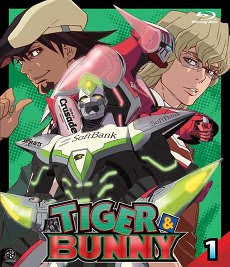 Wild Tiger, aka Kotetsu T. Kaburagi, is a NEXT (what superheroes are called in this series) whose power is called the Hundred: he becomes 100x stronger and faster, but it only lasts five minutes. He has a daughter, Kaede, who lives out in the country with her grandmother (his mom); his wife died some time before the series begins. He repeatedly promises to come to her school plays, but he keeps being called in to work. She doesn't know he's Wild Tiger; NEXT identities are kept secret.

Barnaby Brooks, Jr, is a NEXT with the same power, and Tiger nicknames him "Bunny" because of the ears on his suit. They instantly hate each other, but Tiger tries to make amends, in his own awkward way, over the course of the show. Barnaby doesn't use a stage name, and he goes on camera without his suit to introduce himself. There is a method to his madness: he's looking for Ouroboros, an organization that sent assassins to murder his parents.

The rest of the cast of Hero TV have foibles and personality conflicts, and their competition on TV lends them all a friendly rivalry. I wish Fire Emblem weren't s complete flaming homosexual stereotype, but he's at least respected by the rest of the team.

There is an overarching plot, beside Barnaby's search for Ouroboros, when a vigilante NEXT appears and starts making the public question the value of heroes.

One fun (and believable) aspect of the worldbuilding is that the heroes are all sponsored by a company or two (or three), and their hero costumes bear their logos like NASCAR cars. The companies whose logos appear on the heroes also paid advertising money to Sunrise to get on the show.

It's a lot of fun, and you don't have to already be a fan of the superhero genre to enjoy the show. US-based readers can watch it at Viz or on hulu.
at 15:30