Anime you should watch: Macross

People of a certain age may remember a show called Robotech that played on TV in the afternoons after school. Robotech was based (very loosely) on SDF Macross (and some other giant robot shows). 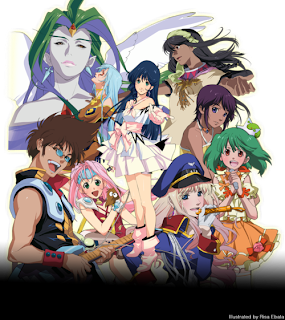 The original series, SDF Macross, began in 1982. In 1999, a spaceship crashes on Earth. UN forces work to understand the technology. In 2009, they've figured it out, and they're about to launch the ship when aliens, the Zentradi--giant humanoids--, attack. The SDF launches, but it accidentally takes along a big chunk of the city around it, civilians and all. Roy Fokker is head of the Skull Squadron, which includes Hikaru Ichijou.

The civilians make the most of living in a giant spaceship (that also transforms), and they hold a pageant, where Lin Minmei (Lynn Minmay) sings. The Zentradi are horrified at Protoculture (music, kissing).

I'm not sure how best to summarize a franchise that's been running for thirty-one years. There are giant robots that transform into fighter jets (the original VF-1s are based on the F-14 Tomcat). There are aliens. There's pop music and love triangles. There are space battles. There's the Itano Circus.

Macross Plus is about a pair of test pilots who hate each other but love the same woman. The idol singer is a computer program named Sharon Apple.

In Macross, Zentradi ace pilot Myria Fallyna marries human ace pilot Max Jenius. They have many kids. They take command of Macross 7, a colonization fleet. She's the mayor, he's the ship's captain. Their youngest daughter Mylene plays bass in a rock band, Fire Bomber. The guitarist, Nekki Basara, prefers to sing at the enemy than fight them.

Macross Zero tells the story of how aliens got to Earth in the first place.

Macross Frontier tells the story of the Frontier, another colony fleet, which encounters the vajra, a hive-mind enemy of sorts. There are tons of references to SDF Macross, including episode titles. Ozma Lee, one of the main secondary characters, is a Fire Bomber fan, so the formations of his squadron (Skull Squadron, of course) are all named for Fire Bomber songs.

To properly enjoy the Macross franchise, you have to let go of seriousness. It's a show about pop music saving the world at the same time as it's a show about giant transforming robot-planes blowing up aliens.

Finding it to watch is another story. Because Harmony Gold bought the rights to original Macross in the US and then mashed it together with two other shows to make Robotech, and they claim the rights to all Macross everything. You can still find Do You Remember Love? and Macross Plus on Amazon, but any other DVDs with English subtitles are bootlegs and you shouldn't buy them. There are ways to get around these things, but you're on your own for that.
at 15:30