Anime you should watch: Shinesman 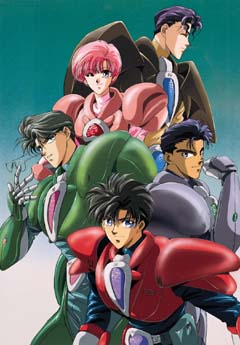 This is the only anime I'll ever tell you to preferentially watch the dub. It's that funny. I've never watched the original, even though it stars some of my favorite voice actors.

Earth is under threat from invaders from Planet Voice, who intend to use the power of marketing and big business to take over the world. They fund and gain profit from a sentai (think Power Rangers) show called Greatman.

Right Trading Company has a sentai team of their own to stop the invasion: the Shinesmen. They're all office workers who have to put on their costume suits when a new threat comes up. Their colors are red, moss green, grey, sepia, and salmon pink. Each team member has a particular quirk (Moss Green is a ladies' man: his most famous line is "I have a date with Turkish twins!").

Shinesman is a parody of sentai shows, and I think it stands up well without any knowledge of the genre. (I'd never seen any sentai shows before, unless you count Voltron as a sentai show.)

The US DVD is out of print, and it's not on any legal streaming sites that I know of. (A google search turns up a couple sites of dubious legality and a couple YouTube rips.) It's worth the hour it will take to watch the two episodes.

"I have to buy my daughter a stuffed fish..."

Fond memories of this :)

"Sheena, get in the glowing green square."