Anime you should watch: Kids on the Slope

High school freshman Kaoru Nishimi moves to a small town in Kyushu to live with relatives. He meets notorious bad boy Sentarou Kawabuchi and their classmate Ritsuko Megae, whose father owns a record shop with a rehearsal space in the basement. 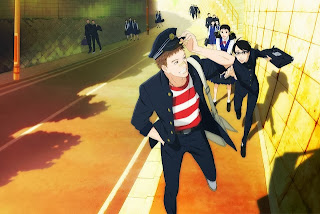 Kaoru's family insisted he study classical piano. He's a very serious boy, studious and a bit uptight. Sentarou gets into fights and likes playing jazz drums. As the two become friends, Kaoru starts to loosen up (a bit) and learns to play jazz. Much of the story revolves around a budding romance and the trio's daily school life.

Set in 1966, KotS also shows the conflict going on in society. Sentarou's role model, Jun, has gone to Tokyo to study, but he gets involved in a student protest movement. On a smaller scale, the trio's classmate Seiji wants to start a rock band like the Beatles, and he asks Sen to drum for him, which sparks a conflict between Sen and Kaoru.

US-based readers can watch all twelve episodes on Crunchyroll.
at 15:30

I ought to give this another shot. Something in the pacing drummed me out when it was originally airing, but I love Kanno, and Watanabe is obviously class.

It's definitely not in a hurry to get anywhere. It's atmospheric slice of life I guess? Very mellow. Until Jun comes back and there's a bit of drama.

Also Kaoru learning to play jazz after being classically trained is spot-on, according to my husband, who had a similar transition as a teen.