Utena Tenjou wanted to be a prince when she grew up. One day, she met a prince who gave her a ring that he said would give her the power to become a prince. She transfers to prestigious Ohtori Academy, where she learns that this ring entitles her to duel for the Rose Bride. 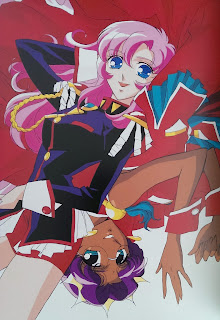 The Rose Bride is in Saionji's possession, as the current dueling champion, when Utena arrives. She's pulled into the strange world of the student council and dueling as soon as they see her rose signet. She wins her first duel, and Anthy Himemiya comes to live with her and do anything she wants.

As Utena duels each member of the student council, her relationship with Anthy grows deeper and deeper, and when she loses her, she despairs.

There are layers upon layers of symbolism. The student council ascends to their meeting room in an elevator while reciting lines about breaking the world's shell. There are feminist readings (note: spoilers in that link) of the text. Here is tumblr user galegas's presentation on why you should watch Utena.

The series originally came out in the US around 1999 from Software Sculptors, who were then bought by Central Park Media, who perished in the great anime bubble burst. Right now, Nozomi Entertainment holds the license, and they released a remastered version in 2011. Nozomi has put all 39 episodes on YouTube, where you can watch for free.

(I have the original Software Sculptors and CPM DVD releases, and I'd like to sell them so I can buy the remasters. If anyone is interested, please contact me!)
at 15:30