I've been busy this summer. I spent 4 days in Atlanta for Shatterdome Atlanta 2 (jaeger boogaloo), was home for two days, then flew out to Seattle for my brother-in-law's wedding on Orcas Island, whence his wife hails, to be gone for five days. So we were gone nine of eleven days.

The con was fun, and the wedding was in a lovely location. 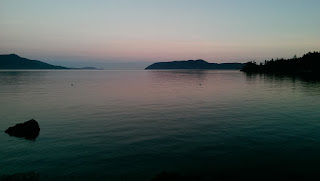 After that, I spent a blissful two weeks without any travel at all, doing my usual things, like sleeping and running and going to trivia. Then it was off to Boston for Readercon.

I had a lovely time at Readercon, seeing my VP17 folks and people from the internet and meeting new people. I didn't get enough sleep, but I never do at cons. I liked having conversations about books and writing and reading and all that stuff, which I don't generally get to do with my local friend group.

I bought three books at the con: Hild (I'm catching up on books I needed to read two years ago that have sequels in progress), My Real Children (on the recommendation of several friends), and The Goblin Emperor (so I can have it forever and also get Ben to read it.)

I went to several panels, some of which I even managed to take notes on. I tend to find that I plan to go to a bunch of panels, then I get waylaid by excellent conversation in the hallway or consuite or bar. Either way, I have fun, eh?

Here are links to the Evernote notes I made of the panels I went to. Hopefully they work...

Drift-compatible Characters in SFF
Writing in the anthropocene
Language and Linguistics in SFF: The Good, the Bad, and the Ugly

They are very note-y, as I was typing them with my thumbs on a tablet, and also trying to pay attention to the speakers. The anthropocene panel had mic issues, so I may not have heard everything properly.

Anyway! I may be able to make it to ReaderCon next year, or I may try to go to 4th Street instead. (I can't afford both.) It depends on a lot of things, like how my summer travel plans shake out and when SATL 3 happens. That kind of thing.
at 21:09