Hello! It's been a minute, eh?

About 2 months ago, the EU added the US to its "safe" zone, then Germany opened their border to tourists from the US (previously, it was open only to people with an urgent need). So I got my plane tickets for August 1 and spent all of July sorting and packing basically everything I own.

Now I'm in Berlin, subletting a furnished room from a Croatian woman. I live really close to the Grunewald park, which is a great place to get some exercise when it's not raining. I went there yesterday by train (it's only 2 stops, but it's a good 40-minute walk to get there, and I wanted to maximize my park-time) and "hiked" (Berlin is a very flat city) 3.6 miles in a little under an hour and a half. I had a refreshing Apfelschorle (apple juice mixed with mineral water), a pizza, and an absolutely delicious melon salad at a beer garden by the train station. The salad had cucumbers marinated in some sort of peppery dressing, chunks of watermelon, and a heap of feta on top. The flavor and texture contrasts were amazing, and I complimented the chef on my way out. 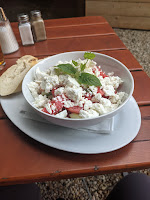 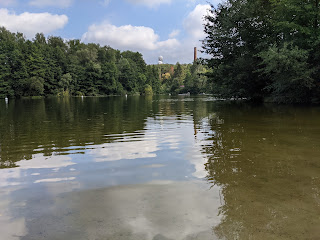 I've finally had some time to write, since I'm just about settled in now. I've had to get a few things, like sheets, pantry stock, and plants, but I haven't had to spend half the day taking the bus or subway to a store and back in about a week. I went to one store to get a printer (they had back to school specials) and carried it in its box on the bus, then down the street and up a zillion stairs. Then it wouldn't connect to the WiFi for a reason I couldn't make heads or tails of (and it was in English), so I had to go buy a printer cable the next day, because of course they don't come in the box anymore. I decided to go to a different electronics store and left with a 3-Euro printer cable and a 15-Euro rice cooker. This is basically how I've ended up spending way too much money in the last 3 weeks.

At least groceries are cheap. I'm still managing to spend a bunch of money on groceries, even though a lot of things cost about half what they do in the US. A 250-g can of store-brand chickpeas cost 39 (Euro)cents! I have 7 in my cupboard. (I used one of them already.)

The way people are handling covid over here is so much different than in the US. You can't go into any businesses or get onto public transit without a medical-grade mask. (No cute cloth masks here!) You see people walking down the street with a mask around their forearm so they have it ready when they need it. It's the latest in pandemic fashion! When I went to see The Green Knight in the theater, I had to show my vaccination certificate to get in, and I was obligated to fill out my contact info when I bought my ticket online. One thing this theater did was block off the seats around you(r party) when you reserved your seat(s), so nobody from unrelated groups was next to each other. They didn't require you to wear your mask during the show, but I did (except when I drank my soda), and so did the other woman in my row.

The movie was trippy as fuck, and I kept getting distracted by the German subtitles and thinking how I would have used different words to give it the same "feel" as the sometimes-lyrical English, which didn't help at all.

I'm making the I-hope-final edits on my indulgent NaNoWriMo project, which is a retelling of the Germanic Siegfried legend from the women's perspectives, and I hope to start querying that by the end of this month. I'm also working on a nonfiction book on linguistics in SFF (for writers), whose sample chapter I need to finish and whose proposal outline I need to make shinier. The last project I queried got no bites, so I'm setting it aside for now and will rework it in the future. I think it's a good story; either the writing itself or the query wasn't landing.

So, that's it for now. You can also follow my YouTube channel and/or support my Patreon (payments currently on hold until I get my tax situation and work permit sorted).