The history behind the story: Something There Is

5 July 1961
Mielke sat behind his desk, and a pair of officers stood on either side of it. They couldn’t consider me a threat to the minister, not after leaving me alone with him so far. Could they? I’m not much of an athlete. I get decent marks in sport, but I’ll never make it onto an Olympics team. Surely they’d know that. They knew everything else.

There was only one chair, so I sat in it.

“How long have you been having these feelings?”

I knew what he meant without asking him to explain further. “I can’t remember not having them.”

I swear he looked like a cat who’d stolen a fish as big as himself before he settled his impassive face back on. “Interesting.” He made notes in a pad on his desk. “What was the first time?”

I told him about how I got separated from Mama and Papa in the park when I was three or four, and when I got scared, I felt something like a hand on my back, guiding me toward them. He wanted to know how often it happened, and I told him it didn’t happen all the time, only when something was important. I didn’t mention that it’s been happening more often recently...

The German Democratic Republic was founded in 1949 in response to Allied recognition of the Federal Republic of Germany. It took shape in the Soviet Occupation Zone as designated by the Yalta Treaty. Berlin, the once and future capital, was itself divided into occupation zones, Soviet, French, British, and US. The Soviet zone comprised about half the city and included many landmarks, like the Museum Island and the Brandenburg Gate.

When the Western Powers worked with Chancellor Adenauer and his government, relocated to Bonn, to create the Deutsche Mark (which sparked the West German economic miracle), the Soviets and the SED (Socialist Unity Party, the East German politburo) disagreed and blockaded West Berlin. The Western Powers responded by airlifting supplies into the city for nearly a year until Stalin ended the blockade.

West Berlin served as a convenient exit point for residents of the Soviet sector, as they could go into the other side of the city by showing simple documentation, and they could defect to the west from there. Alarmed by this exodus, the SED decided to put a stop to it. In 1952, they built a barbed-wire fence along the inner-German border, and throughout the 50s, they made it increasingly difficult for GDR citizens to travel into the west.

Berlin remained a loophole, however, and it wasn't until 1961 that the SED closed it. The Party began stockpiling bricks and other construction materials, and, when asked about it, First Secretary Walter Ulbricht said, "No one has the intention of building a wall," and that they were using the materials for normal construction. The city was still largely devastated from the bombings, after all. This was June 15, 1961.

August 13, 1961, the border between West Berlin and East Germany was officially closed, and the first foundations of the Wall were laid. This sparked international outrage, and fear among the citizens--including some who were separated from their families. The original cinderblock and barbed wire wall grew into this, which they called the Anti-Fascist Protection Wall: 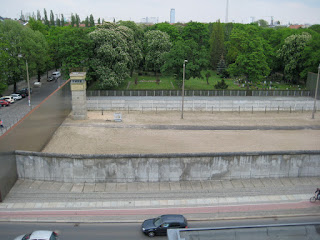 A two-cobblestone-wide line runs through Berlin today, a reminder of where the Schandmauer (shame-wall) once stood. A vibrant business district stands in the former wasteland of Potsdamer Platz. 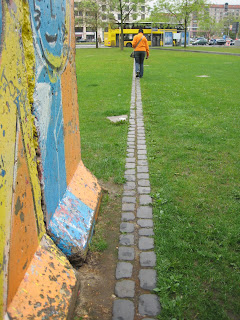 The Ministry for State Security, the Stasi, kept GDR citizens in line through both spying and a formalized informer state. After 1989, it was thought that the Stasi had 175,000 unofficial informants, but more recent studies suggest it was closer to 189,000, not including the official employees. They rooted through the garbage, steamed open letters, installed hidden cameras and microphones in people's walls. (They also operated an outward-facing spy agency.) People who opposed the SED were jailed. People who tried to escape were killed.

The GDR was a real-life dystopia.

How does this relate to the story? you ask. What would happen if a teenaged girl who can hear the voice of the city were coerced into becoming an informer for the Stasi? Find out on December 18, when Substitution Cipher is released!

Come back on Monday to find out more about the story behind the story.

(This post was inspired by fellow Substitution Cipher author M. Fenn's post about the real history behind "So the Taino Call It.")
at 17:00

Very cool! I'm looking forward to reading your story and the next installment the history behind it. :)

I hope the next post isn't too rambly ;) The inspirations for the overall story are somewhat diverse.