The story behind the story: Something There Is

Two and a half years ago, I was sitting on an overnight train from Berlin to Vienna, watching the city I love pass by and fade into the distance.

I'd just finished a four-week intensive course at the Goethe-Institut, and I was off to Austria to meet my husband, who was flying out for a two-week trip around the Habsburg capitals for our tenth anniversary.

When I visit Berlin, I'm always overwhelmed with the sense of history there. As I'm walking past brick walls that surround cemeteries or past any of the hundred or two-year-old buildings, I feel like I could reach out and touch the stone and get some sense of that building's past.

Like Sergey Larenkov, I can imagine the ghosts of the city, the old and new overlaid. (Check out more of Sergey's work. He's got some really amazing pieces about the siege of Leningrad/St Petersburg.)

I'm a child of the 80s, and a lot of the media and entertainment during my formative years were about the impending nuclear holocaust. The ones that weren't about misfit high school students, anyway. The Cold War is still interesting to me, even more so as I get older and read more about the history I never got in school (partly because there wasn't time (we got as far as Vietnam in US History 2), and partly because it was current events).

Abandoned, lost, and forgotten places have a certain appeal to me. There's a bit of sadness, of melancholy, of the decline of something once majestic ("Ozymandias" is one of my favorite poems). You can almost see the ghosts.

Places like this are scattered throughout former East Germany, as the massive state-support structure collapsed and these firms were unable to compete with the vast capitalist world. Unemployment is higher in the east (the euphemistically named "new states") than the west. 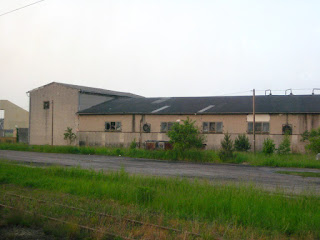 I have, scattered in various notebooks, beginnings of stories about a girl (always a girl) who can commune with the city of Berlin. This one sprang from an opening line (which doesn't actually appear in the story): "The city tells me things. That's why they find me useful." Then I saw the call for submissions for Substitution Cipher, and I had to write it.

I thought it should be a Cold War story, but Cold War spy stories are a dime a dozen. So I took that concept back to the 1880s, kept Kaiser Friedrich III alive, and tried to make it about a minor functionary (alternately the mayor) spying on some anti-reform faction or other, but a) the research was making my head spin, and b) the story just wasn't coming.

So I went back to the Cold War and the initial construction of the Berlin Wall. That's what this story had to be. It's not your usual le Carre or James Bond-style Cold War spy story. It's not even a Black Widow story. It's a cross between magical realism and historical fantasy, about a high school girl coerced into working for the Stasi.

I hope you like reading it as much as I enjoyed writing it.
at 17:00

I enjoyed the story quite a bit, as did my husband,. Good job!