Anime you should watch: Black Lagoon

Lagoon Company, a team of pirate-mercenaries in the South China Sea, is hired to hijack a cargo ship and take a hostage. Unfortunately for Rokuro Okajima, his company doesn't ransom him and writes him off as dead. Rokuro takes on the nickname Rock and joins Lagoon Company. Hijinks ensue. (By "hijinks" I mean violence and piracy.) 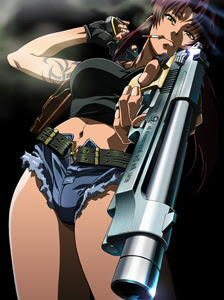 This show is very violent! There are shootouts and bombings and lots of guns. If Die Hard is too violent for you, this show will be, too.

Lagoon Company is made up of four people once Rock joins them. Revy (the fanservice gal in the picture there) is very hot-headed and usually shoots first and asks questions later. She terrifies Rock a bit, but they both have a strange attraction to the other. Dutch is the brains of the operation. He's an African-American Vietnam vet. Benny is a blond American computer hacker with a penchant for Hawaiian shirts. He's on the run from the FBI and the mafia.

Lagoon has some rather formidable opposition around the lawless city of Roanapur (fictional): the Chinese mafia (the Hong Kong Triad), headed up by an homage to John Woo characters played by Chow Yun-Fat; Hotel Moscow, a Russian mafia, headed up by Balalaika, a cigar-smoking woman with a major burn scar on one side of her face, who was a captain in the Soviet Army during their war in Afghanistan; and the Colombian cartel, plus various and sundry unaffiliated gangsters, bounty hunters, and mercenaries, a yakuza group, and some neo-Nazis.

The Church of Violence uses a Catholic front to cover illegal arms dealing. Revy knows Eda, one of the "sisters" there, from childhood, and they have a rather friendly-antagonistic relationship.

There is, actually, an overarching plot, involving a lot of background political manipulations. The relationships between the members of Lagoon and their foibles, and their relationships with the other gangsters, play a fairly big role in the series. It's not always a shoot-em-up.

If you like action movies, you can watch all 24 episodes free at Funimation. (US-based readers only.)
at 15:30