Anime you should watch: Darker than Black

Ten years ago, the world changed. A mysterious anomaly called Hell's Gate appeared in Tokyo, and another, Heaven's Gate, appeared in South America. The real sky was replaced by a false sky with false stars. Five years after its sudden appearance, Heaven's Gate just as suddenly disappeared, taking everything within a 1500-km radius with it. Around the same times that the Gates appeared, people with supernatural abilities began appearing. The intelligence agencies and governments try to keep this a secret. 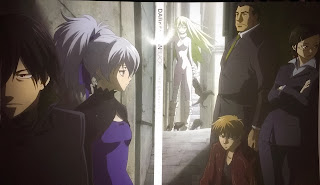 Contractors, the term for the people with superpowers, have to pay a price when they use their ability, called the remuneration. It takes many different forms, like smoking a pack of cigarettes, drinking beer, or breaking a finger. They don't feel emotion the way normal humans do.

The new false stars on the horizon can represent contractors, and PANDORA, the UN agency tasked with monitoring and researching contractors, gives each contractor and their corresponding star a code name.

The story of the first series revolves around Hei, a contractor code-named BK-201, and his team of underworld agents, Yin, Huang, and Mao. Many of them fought in Heaven's War, which took place around Heaven's Gate before it vanished. They take small espionage and assassination jobs for The Syndicate, and they run up against Evening Primrose, a group that wants to publicize the existence of contractors.

The leader of EPR is someone Hei knew from when he fought in Heaven's War, another contractor named Amber.

In Gemini of the Meteor, set after the ending of the first series, a teenaged Russian girl named Suou discovers she's got a mysterious ability and the Syndicate and other intelligence agencies are after her. She runs into a contractor named Hei, who rescues her. Her ability is rather cool: she can manifest an anti-tank rifle.

As a story, the first series works better than the second, but both are worth watching.

US-based readers can watch the entire series at Funimation.
at 15:30