Anime you should watch: Broken Blade

Rygart Arrow is an un-sorcerer: unable to move quartz even the smallest amount, unlike everyone else on the continent of Cruzon. This makes him completely unable to control the quartz-powered mecha he tried to learn to pilot at Assam Military Academy. 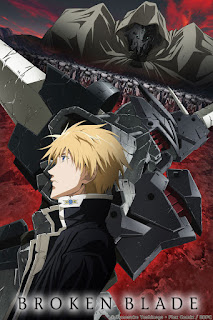 Rygart receives a letter from his former classmate King Hodr, informing him that he needs to come to the capital of Krisna because war is about to break out, and they've discovered a strange mecha (called golems here) in a mineshaft. It appears to be a remnant of a vanished civilization, and none of the people who can control quartz can get it to move. Queen Sigyn, an engineer, thinks Rygart is the key to using it.

The Athens Commonwealth has begun invading. Their strike teams are made up of powerful sorcerers, and they overwhelm all defenders. The leader of the strongest strike team is Rygart and co's friend from the Academy, Zess.

Unlike most other mecha shows, this is fantasy. I was intrigued to find out whether a mecha fantasy would even work, and I was glad to learn that it did. The way the golems work is interesting, and the ways they break are also interesting.

There are a lot of political machinations going on, and there's plenty of interpersonal drama going around.

The only thing that keeps me from whole-heartedly recommending this is the completely unnecessary fanservice. (By definition, fanservice is unnecessary, so that's a little redundant.) There are multiple lingering pans over Sigyn's ample bosom. It's not all the time--and Sigyn is generally shown to be extremely competent at her engineering job, if a bit scattered--but it diminished my enjoyment ever so slightly.

The series was produced as six one-hour movies. The animation quality is therefore higher than the average 12-episode TV series. US-based readers can watch it at crunchyroll.
at 15:30