Justy Ueki Tylor is assigned to the Soyokaze, an aging spaceship of the United Planets Space Force. He's the type of person who somehow manages to stumble along despite being completely oblivious to everything. He's just lucky. 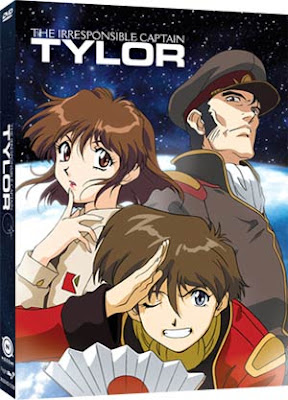 When Tylor enlisted, he thought he'd get a desk job and have a peaceful life. He's barely finished the qualifying exam when war breaks out with the Raalgon Empire, and he's thrust into the middle of it. Tylor's superior officers don't think much of him, because he's so feckless and lazy, but he manages to get the job done (or, in one memorable episode, doesn't at all).

Tylor and his crew get involved in hijinks, both on their own accord and because the admiralty is trying to kill Tylor. When the Raalgon capture him with the intention of executing him, the stakes get higher.

The 26-episode series is not available streaming online, but copies are available for purchase from RightStuf, whose Nozomi Entertainment branch owns the US license.
at 15:30