Anime you should watch: Rideback

In the not-so-distant future, the Global Government Plan has taken over the world, creating a military dictatorship. Rin Ogata's mother was a famous ballerina, and Rin was on the path to becoming a famous ballerina herself until she severely injured her foot during a performance. When she gets to college, she discovers the Rideback club, a group of hobbyists who ride transforming motorcycles, and she gets to dance again. 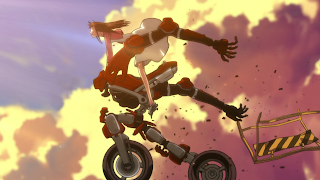 Rin takes quickly to Fuego, the Rideback she's assigned in the club, and she competes in the obligatory race. (The manga ran in a seinen (teenaged boys) magazine.) The plot thickens when the BMA, an anti-GGP organization, begins staging protests, and Rin's younger brother gets involved.

Unfortunately, the anime adaptation was only 12 episodes long. When it ends, the broader hints of a dystopian setting are only starting to become visible. With the current state of the manga industry in the US, odds that we'll see the 10 volumes released in English are very low.

US-based readers can watch it free at Funimation.
at 15:30