Adventures in public transit: my football weekend in DC

I went to the Durham Amtrak station and waited for my train. I saw an old acquaintance in the lobby with two of his friends, who were going up to DC for one of their bachelor party, so we sat together. I didn't get much of the reading I'd intended done, but it was an enjoyable, convivial trip.

We were making good time, no delays, until about an hour north of Richmond, when we stopped. The engineer said there was a disabled freight train ahead of us, so we had to wait. (In the US, the freight companies own the tracks and have right of way, everywhere except the line between DC and Boston. Also, there is only one pair of tracks in most routes.) So we sat there for half an hour, when the engineer came back on and said the train was two miles long, so we'd be backing up to switch tracks.

We backed up most of the way to Richmond, which is apparently the closest switch. So I was about an hour and a half late, but I eventually made it to my sister's, where I dropped my bags off, and we walked out to Agora for Turkish (and a little Greek) tapas. I finally tried Imam bayildi (it was quite good). The falafel was excellent, and I took a couple of her brussels sprouts, which were fried and quite tasty.

Saturday I met a friend in Bethesda for lunch. My plan was to walk over to Dupont Circle to catch the red line north, except the red line was closed between Woodley Park and Metro Center for track work. So I took the shuttle and eventually made it to Bethesda. We ate at Tandoori Nights. I liked the food I had, paneer krahi. So then I went back to DC. At Woodley Park, everyone had to get out and get onto buses. I was herded onto what was apparently an express bus, so I had to then go find a second bus that would take me back to Dupont and actually let me out.

It was really fcking hot all weekend, with loads of humidity, so when I made my planned stop at Teaism to purchase looseleaf tea, I also bought a cup of iced tisane (which was one of the teas I bought, Ginger Zing. I liked it a lot.) which helped me get back to my sister's without getting massively dehydrated. (Gatorade is my BFF.)

That night we went out for wood-fired pizza at Matchbox, and my sister made pie. She lives in walking distance of both Dupont Circle and U St, which is really convenient.

Sunday morning, I had yet another transit adventure. I didn't want to deal with the line work (all of Metro was undergoing maintenance), so I opted for a bus route with one transfer. I got on the bus labeled for where I was going, except ... it stopped. So the driver told me I should walk a few blocks down to Pennsylvania and catch the bus I was going to get there. Except when I got to the stop and called up NextBus, it told me there were no buses coming "for a long time." So I did the only thing left: I called Ben's brother, to whose house I was going anyway. (I stayed with him Sunday night, so I had my luggage with me.) He was dropping a friend off at National and could pick me up in about 20 minutes. So I got a ride in his Miata with the top down.

Then we had to coordinate lunch for three people (me, him, his girlfriend) before going to RFK Stadium for the game. I've written more about the game for another blog, and you can read it there. Or you can look at my photos here. Here's a picture of me at the stadium. We were really close to the field. 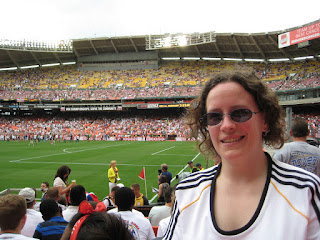 After the game, we went back to their house and decided what to do for dinner. We eventually opted to walk over to a Thai restaurant, at which point it started pouring rain. We got out rain gear and walked maybe two blocks before I said, "I don't suppose this place delivers." Of course they do, so we walked back, dried off, and got take-out Thai food.

Monday morning's transit adventure wasn't much of an adventure. Aside from having to wait until the rain slowed down before I walked to the Metro station, getting from their house to Union Station wasn't a problem at all. The Amtrak train was delayed 25 minutes, so I had to wait in the gate area for longer than anticipated. That was the only delay, however, and I got a lot of reading done. I even took a nap.

One thing I always find surprising about Amtrak is how weird it is compared to European trains. Amtrak makes you get on particular cars based on where your destination is. They put tags over your seat with where you're getting off. The conductor will tell people their stop is coming up, personally, not just via the overhead communication system. Only certain doors open at any stop. It's just so weird. Having ridden trains in Germany, Slovakia, Austria, Hungary, and Japan, where the conductors basically ignore you except to ask for your ticket (and fine you if you have the wrong one; also, in Germany at least, you can buy your ticket on the train from the conductor), I find this near paternalism utterly bizarre. The only time I've had to sit in a particular car was when I took the train from Berlin to Vienna, which split into two trains in the Czech Republic, so you had to sit in the right half of the train if you didn't want to end up somewhere like Brno instead. (I had a reserved seat anyway.)

Also, every time my German friends complain about how terrible Deutsche Bahn is, I want to challenge them to plan a trip on Amtrak.

One thing I had confirmed this weekend, though, is that I am definitely a city girl. I like tall buildings, lots of people, walking to get groceries or food. While we were driving home on the highway, I had this sense of something missing. Boredom. Loneliness. A need to get back to a city. Ideally, I want to live in Berlin. I can't afford to live in DC. (Also you really need a car, or a friend with a car, or a zipcar membership, if you want to go anywhere like MD or VA on a weekend or during non-commuting hours.)
at 15:30

I'm not sure where the whole seating-according-to-destination thing comes from. On long cross-country trips, the porters (I think they still use that term) come around and tell people their stop is coming up. The stops aren't announced, so sometimes you have to sort of guess where you are, especially if you've been sleeping. If you're getting off at 2 am in Indiana, you might be the only one getting off there, so it was nice to know that someone would notice if I didn't wake up. Also, I think it prevents people from sneaking on as easily. There are tons of unmanned stations that ALSO let you get on without seeing a ticket. So technically, you could sneak on the train, wait in the bathroom while the conductor comes around to punch tickets, and then just ride free(if not for the porter recognizing everyone). For me, it's refreshingly low-tech and inefficient.

They seem to manage well enough in Europe, though, without the hand-holding. Then again, if you sleep through your stop in Europe, there's probably going to be another train you can get on that'll take you to your destination within a couple hours. As opposed to Amtrak, in which case you're screwed.