Anime you should watch: Toradora! 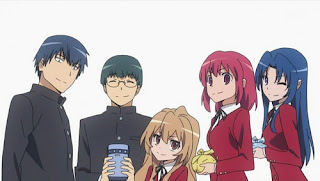 Ryuuji Takasu is preparing to enter his second year of high school (11th grade). He's had a lot of trouble because he looks like a thug, thanks to the set of his eyes, but he's really not into gangs and violence. His mother works nights in a hostess club, and his father was a bad boy.

Taiga Aisaka is a classmate who is friends with the girl he has a crush on, Minori Kushieda. Taiga is short, short-tempered, and has a generally nervous personality. She has a crush on Ryuuji's best friend Yuusaku. They decide to help each other get to know their crushes better, except there's one flaw in their plan: they spend so much time together that everybody thinks they're dating.

The name of the show comes from their names: in Japanese, taiga is approximately how you pronounce tiger, hence tora. Ryuu is the Japanese word for dragon, which would be phonetically transcribed as doragon, hence dora.

It's a cute slice of life high school drama/comedy. The only thing I don't like about it is the ending, because I wanted it to subvert the trope it looked like it was going to, but then it didn't. I was disappointed.

Even so, it's a fun show about high school kids. US-based readers can watch it here.
at 15:30