Anime you should watch: Eden of the East

Akira Takizawa wakes up completely naked, in front of the White House, with a gun and a cell phone. He has no memories of how he got there or why he's at the White House, naked, with a gun. The cops notice him and start chasing him around DC, where he runs into Saki Morimi, visiting the city as part of a graduation trip. 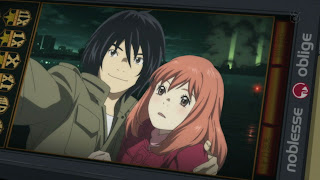 Three months before the show opens, there was a terrorist attack called "Careless Monday," in which missiles struck ten uninhabited parts of Japan. When Saki and Akira are returning to Japan, they learn of another missile strike.

Akira is part of a game to "save Japan." He's one of the Seleção, chosen by Mr. Outside. His cell phone connects to Juiz, who uses the funds attached to the player's magic phone to make their orders happen.

Over the course of the show, the strange secret conspiracy becomes more and more dangerous. Players who run out of money before winning the game are killed. Saki tries to unravel the mystery around Akira, and she and her friends get in over their heads.

The first episode was my favorite, but I watched it every week with a dear friend and we always had fun. Kenji Kamiyama is a heck of a director.