Anime you should watch: Gundam: The 08th MS Team

Shiro Amada is sent to Earth to help fight Zeon. He joins up with his new squad, and they work alongside local guerrillas to drive out the Zeon occupiers. Zeon has a terrifying huge new mobile armor, piloted by Aina Sakhalin. 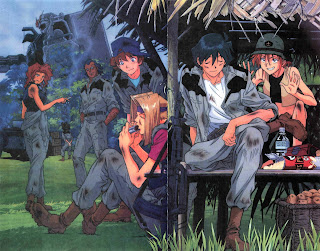 The Gundam franchise started in 1979 with MS Gundam: 0079, in which the Principality of Zeon attacked Side 7 (space colonies are called Sides here) in order to find out more about the Federation's weapon capabilities. They discover the Gundam (RX-78). The Side is evacuated, and Char Aznable, Zeon ace pilot, chases the ship, White Base, to destroy it.

There are a lot of different, unrelated Gundam timelines, but UC (Universal Century) is the original. The UC Gundam series include 0079, 08th MS Team, 0080/War in the Pocket, Z, ZZ, Char's Counterattack, 0083 Stardust Memory, Unicorn, and Turn-A. The basic plot behind the UC timeline is this: Earth became overpopulated, so people started colonizing space. They built Sides at Lagrange points. The Sides were all basically united under the Earth Federation, until Zeon zum Deikun decided to declare independence for Side 3. The Federation didn't like that, so there was a war. (It's a bit more complicated than that, but there's your 30-second summary.)

08th MS Team takes place in 0079 in Southeast Asia, while White Base is fighting Char elsewhere. The series was released direct to video (which, in Japan, doesn't imply terrible quality; frequently the opposite: OVA series have higher budgets and more time to do the animation) in 11 episodes and an (entirely unnecessary) epilogue between 1996 and 1999. It stands alone from the rest of the UC series quite well and can be watched without further knowledge of the timeline, though knowing about the internal conflict in Zeon between the Zabis and Zeon zum Deikun's family helps.

In my opinion, this is the best Gundam series. It's self-contained, and it's paced well. The animation has held up over time: a lot of shows from the late 90s look very dated, but this doesn't. (Much.)

Unfortunately, after Bandai USA closed up shop, this went out of print in the US, so good luck finding a copy at a reasonable price. Amazon is currently listing the DVD set at $120 new, with some used copies as low at $50. (When it was in print, it sold for about $35.)

You can get a taste of it in this awesome fan-made video set to "Tenth Man Down" by Nightwish.