Anime you should watch: Here is Greenwood

Kazuya Hasukawa arrives at Ryokuto Academy late, and the only room left is in Greenwood dorm with Shun Kisaragi, a very feminine-looking young man*. The heads of the dorm are Shinobu Tezuka, who has a rich family and a strange sister, and Mitsuru Ikeda. 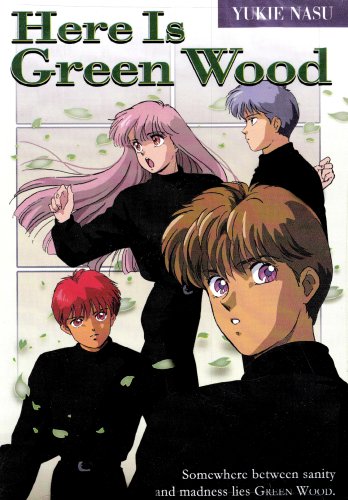 />
Kazuya has to deal with the very eccentric people living in his dorm, like the motorcycle fanatic and Shinobu and Mitsuru (they're best friends and roommates; they count as a unit). His older brother married the girl Kazuya had a crush on when he was younger, and now the brother is the school doctor. Kazuya moved out of his home and into the dorm to get away from his brother and the girl he crushed on for years.

The six OVAs revolve around Kazuya and the guys in the dorm. One episode is about an inter-dorm competition for prize money, wherein the guys of Greenwood make a movie called "Here is Devilwood," a very tropey fantasy thing starring Shinobu as the evil wizard. The last two are about Kazuya meeting a girl his own age and falling for her and their budding romance.

*It's been a while since I watched this. The way Shun is introduced to Kazuya (he pretends to be a girl living in the boys' dorm For Reasons to haze the newbie) is problematic. Shun is not intended to portray a trans* person (he is decidedly a man). This may turn some people off. Decide for yourselves.

Getting a copy in the US is [currently] easy. Copies are available on Amazon for very reasonable prices, new and used. This may change in the future. Media Blasters' license expired, and Central Park Media relicensed (and redubbed) it. I'm not sure what the current license status is, because CPM went bankrupt in 2009.
at 15:30