Anime you should watch: Voices of a Distant Star

Voices of a Distant Star, written, animated, and directed by Makoto Shinkai, 2002.

Back in 2002, digital animation was slowly increasing in popularity in Japan. CG backgrounds or CG battleships and hand-drawn people were becoming more common and starting to look less god-awful.

Then one day, everyone started talking about this guy Shinkai, who was releasing a 30-minute OVA he'd done entirely on his Power Mac G4, with friends supplying the voices. It was a hit.

In 2046, aliens attack Earth, and Mikako becomes a pilot to defend the planet. She keeps in touch with her best friend/boyfriend Noboru via text messages from her phone. As she goes further into space, the messages take longer and longer to arrive. They try to stay connected over increasing distance--and age. 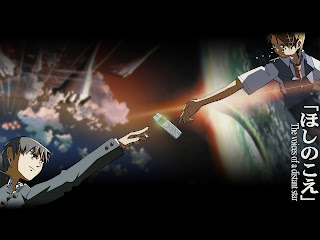 As a story, it's somewhat psychological, exploring emotional distance through literal physical distance. As to the animation quality, the blending of CG with hand-drawn elements is much better than its contemporaries, and it's almost seamless. (For an example of bad early attempts at blending CG and hand-drawn animation, I give you Blue Sub No 6.)

ADV brought this out in the US, and ADV went belly-up in the great US-anime-company bubble burst of 2008. (Technically, they split into multiple branches like a hydra, since ... well, it's complicated.) Copies--even used--are running upwards of $60 on Amazon right now, so good luck if you want to own a copy.

US-based readers can watch it streaming on Crunchyroll.
at 15:30