Anime you should watch: Azumanga Daioh

Azumanga Daioh ran as a 4-panel gag comic in Dengeki Daioh. The title is a pun on Azuma+manga and Daioh (which, aside from being the book title, means "great king.")

The story revolves around six girls at an unnamed high school in Tokyo and their daily lives. One of them is a transfer student from Osaka, who speaks with Osaka dialect. Another is a child prodigy who is five years younger than the rest. A third wants to pet all the cute animals, but they all want to bite her. 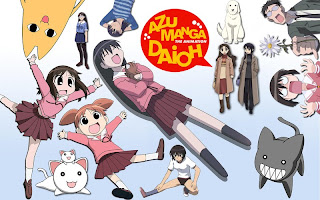 It's a slice of life in a Japanese high school, with sports, clubs, school festivals, homework, college entrance exams, and other assorted fun. It can be very silly at times, but it's cute.

The US license was held by now-defunct ADV Films, so it's out of print. Copies of the DVDs are available on Amazon for absurd prices ($75+ used, $150+ new, for a 26-episode series). None of the legitimate streaming sites have it. Netflix might; I'm not a member and can't search the catalog. There are other ways to see it, but you'll have to find them on your own with help of your favorite search engine.
at 15:30