I'm back from DragonCon, though I still haven't caught up on sleep. I had a lot of fun, though I only made it to a couple panels. I saw a lot of costumes, hung out with friends, and bought a Pacific Rim poster signed by Guillermo del Toro. (That was my top accomplishment of the con.) My costume was successful, and I only got mistaken twice: once for Daenarys (or however you spell it; I'm not a Game of Thrones fan), which was utterly mindboggling, and once for Starbuck from new BSG (which actually made *sense*).

I have a bunch of photos up on my tumblr. Disney set, anime set, superheroes set, miscellaneous, and *punk.

And here's a picture of me and another person cosplaying Sasha Kaidonovsky, from the Pacific Rim photoshoot. I'm on the right. The coat got really warm really fast. 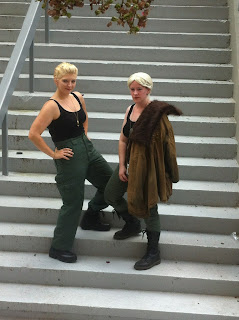 On a topic not related to DragonCon, once again/as usual people are attempting to gatekeep science fiction. Paul Cook wrote an essay on the Amazing Stories blog about how women can't write real SF because they put in things like feeling and descriptions of clothes, and also women are destroying SF with their writing about stupid girly things. Foz Meadows has an excellent deconstruction of his garbage.

Lightspeed Magazine has announced a special Women Destroying SF issue for next year.
at 14:57

Sigh. The Paul Cook thing depresses me to the point where I can feel the energy leaving my limbs.

Yeah, it's just ... haven't we had this discussion before? Like the time di Filippo likened women writers to lettuce? Or dozens of times before that?

And didn't James Tiptree poke holes in his "women only write girly stuff" nonsense? People were 100% certain she was a man because of her writing.

Can't we just move on from this whole slicing and dicing and exclusion?