Anime you should watch: Giant Robo

Professor Shizuma invented a power source that eliminated the need for fossil fuels or nuclear power. Unfortunately, when he and his colleague Franken von Vogler were researching it, they nearly destroyed the world in what became known as the Tragedy of Bashtarle. 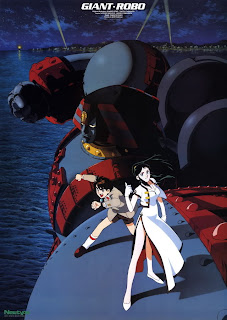 Vogler disappeared in the Tragedy of Bashtarle, but ten years later, he's resurfaced and joined the Big Fire group, who are working to recreate the Tragedy. They have superhumans, robots, and monsters.

Working against BF are the International Police Organization. To counter the supernatural elements of BF, they have the Experts of Justice. There's also Daisaku Kusama, who has no superpowers, but he does have a giant robot. (And short shorts.)

There are spies, mecha fights, kung fu fights (including a drunken master), and hijinks. It's a lot of fun and very much in the style of 60s super robot shows.

It was licensed in the US by Media Blasters, which no longer exists, but you can still find copies on Amazon for relatively cheap. If you want to try before you buy, someone has uploaded the US dub opening to YouTube. (FYI: The dub is terrible and makes it sound awful.)
at 15:30